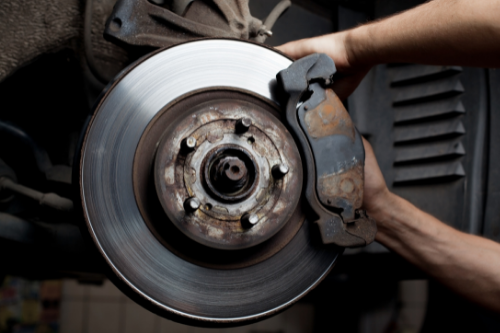 Why do so many local auto mechanics and local auto repair shops just replace your brakes rather than looking to repair to part/s that need to be fixed?  Seems kind of like if you were eating some local blue point oysters and there was one oyster shell that opened with nothing inside, and the server took your entire plate of oysters and threw it in the trash and then charged you for a new batch of oysters instead of just replacing the one that did not have anything inside its oyster shell.

Long Island’s best mobile mechanics offer full-service brake replacement and repair, if one part or multiple parts of your brakes need to be repaired, we do that, if the whole system needs to be replaced, we take care of that, if one or multiple parts need to be repaired, our team handles it.  We do things in a way that makes sense and works out the best for you, we don’t limit ourselves or you by only doing replacements on brakes when something less complicated and less expensive could get the job done.  Going back to the example from before our brake replacement and repair would be like in the same scenario you just got a replacement for the oyster that did not have anything inside its oyster shell and were not charged for an entire new plate of oysters.

Another scenario that will help demonstrate how much better our brake services are than the other local auto mechanics and the local auto repair shops would be their brake services would be like if you told your tour guide I want to go see the giant duck sculpture I heard about and they drive you out to somewhere that a giant chicken sculpture is and when you say that’s not what I was talking about, they say, well its close enough. The best mobile mechanics in Long Island’s brake replacement and repair in that scenario our service would be like if your tour guide took you the Big Duck landmark in Flanders, New York, doing exactly what you asked and finding the correct landmark.

Essentially, the difference is we take the time to make sure the fix is right so that you get what you need at the best price, and in the least amount of time possible, and the other local auto mechanics and local auto repair shops do what gets them done the fastest or makes them the most amount of money off of fixing your vehicle as they have more customers waiting and likely have to service a certain amount of customers per day to keep their jobs.  We do not have any restrictions or limitations we just offer the best services and ensure that we get what you need done right all while making sure to save you time and money.  That is what makes us stand out and what makes us the better choice for your vehicle, there is no other people or place in Long Island that can scratch the surface of what we are able to offer you.